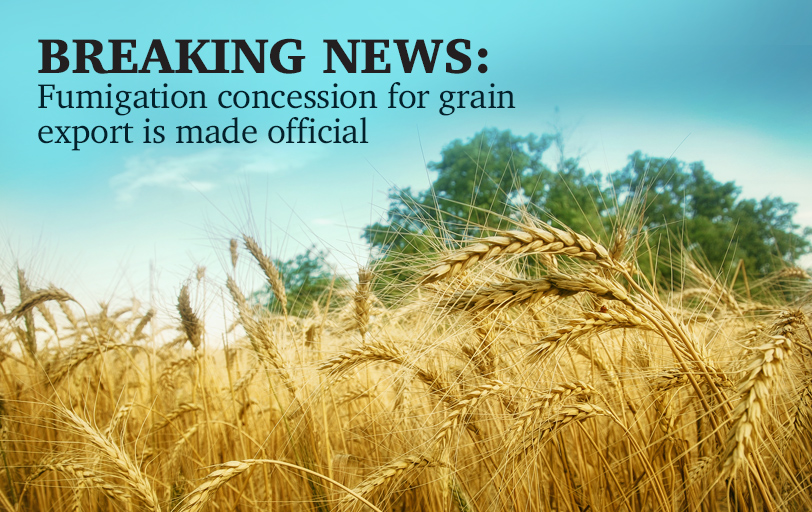 Revised authorisations for the aluminium and magnesium phosphide pellet and tablet insecticide fumigants have been issued and will shortly be uploaded onto the Chemicals Regulation Directorate (CRD) website.

This is very good news for grain fumigators using fumigation tablet and pellet insecticides. It is good news because the concession that was in place, allowing these products to be applied loose and direct to raw commodities (grain) for export outside of the EU, has now been made official as part of amendments to product approvals.

The history behind this starts with a plant protection restriction being applied, which did not allow tablets or their spent residues to come into contact with food or feed. This was problematic because it meant that commodity shipments for export (e.g. grain to North Africa as an example) could not be treated in line with existing contractual obligations. The economic impacts that could have occurred due to this cannot be understated.

Action to address this was taken and the UK regulatory authority (CRD) granted a concession for grain/raw commodity fumigations, following careful negotiations with the Register of Accredited Metallic Phosphide Standards (RAMPS). Stock was supplied to fumigators for use without the aforementioned plant protection restrictions, under specific conditions and this concession is still in place until;

The specific conditions – For commodity shipments only; and contractual obligations must be shown.

This was a great move but fumigators were quite rightly concerned that the concession was soon coming to an end, without any news on what the future may hold beyond the relevant dates.

Thankfully, RAMPS was working exceptionally hard behind the scenes. Successful discussions have resulted in the concession now being made official, by way of product authorisations being amended.

We should also take time to note that the occasionally maligned ‘authorities’ have acted sensibly in all this by listening to industry feedback and achieving an outcome that is practical and grounded in common sense, so a ‘thank you’ is due to CRD as well as RAMPS.

The product authorisations themselves will be amended to include the new highlighted text below:

(2) Pellets or their spent residue must not be allowed to come into contact with food or feed;
(3) Other specific restriction (2) does not apply in the following circumstances
(a) Treated unprocessed food or feedstuffs are destined for export outside of the E.U.
and
(b) The commodity is treated under contract from the destination country and the sanitary/phytosanitary requirements of the importing country specifies that direct insertion of pellets/ tablets is required.

Pest Tech The Largest Pest Control Event is Back