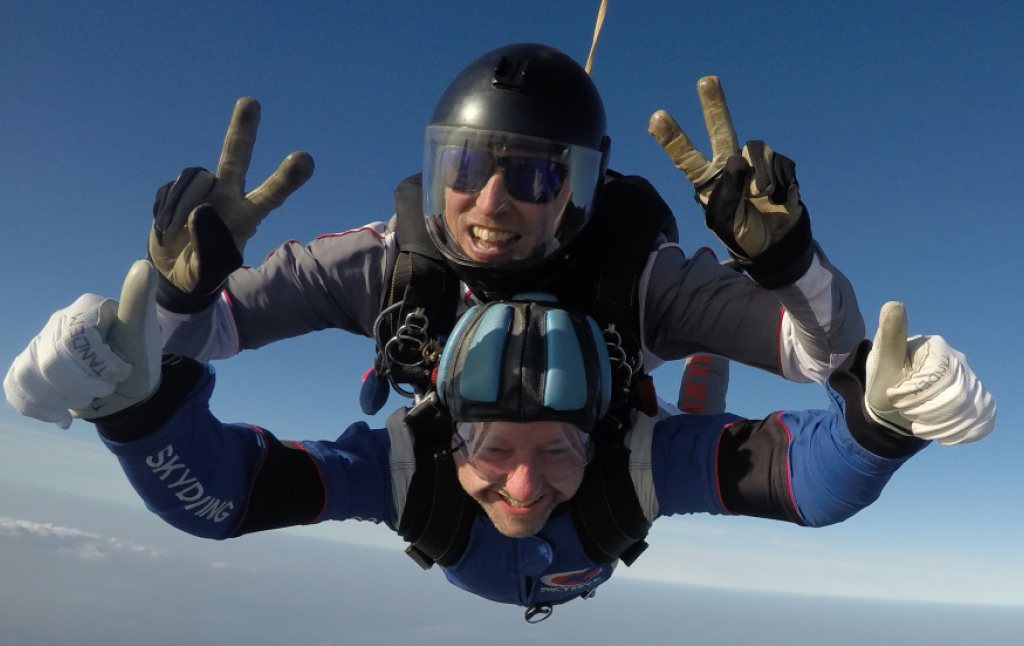 On the 14 of April this year Mark Ward, Product Development Specialist, Killgerm, completed a skydive to raise money for Western Park Cancer hospital after his mum was diagnosed with cancer for the second time.

After a conversation with some friends, Mark and six friends decided to book a Charity jump at Hibaldstow Skydive centre, near Brigg, in North Lincolnshire.

The training took place on the day of the jump and consisted of, learning how to position your body for the exit from the aeroplane and during the freefall. They also explained what to do if your first parachute failed and let you know It was ok to scream.

The flight to altitude took around 15 minutes and during this time another safety briefing took place, which Mark informs us wasn’t so bad as he got to admire the wonderful view from 3 miles high.

To exit the plane, Mark sat on the edge with his feet under the fuselage, and after a quick wave to the camera he rolled forward to depart.

Mark added, “When you jump the plane is traveling at about (90 knots) just over 100mph and the outside temperature is around -15˚c.”

The freefall lasted approximately 90 seconds, reaching a terminal velocity of around 120 mph, the parachute is opened at approximately 5,000 ft.

Mark said, “The instructor offered me a chance to control the parachute letting me spin and dive until we were about 500 feet from the ground.”

Mark had a seated landing as there was no wind on the day, this entailed sliding on his bottom at around 20mph, which he informs us was, “great fun if a little bumpy.”

Between the six participants who did the jump they managed to raise just over £3,500 for a great charity that has helped to save many people’s lives including Mark’s mum … (Twice!)

Killgerm Keeping You Informed – Requirements for users and suppliers to register their involvement with Plant Protection Products.