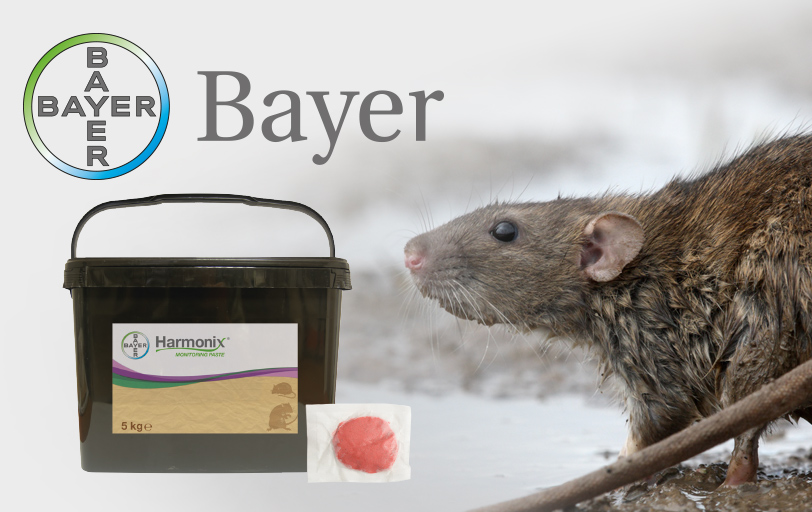 A new hypoallergenic, non-toxic rodent monitoring bait, specifically developed for the food industry and other sensitive sites, is being launched into the market by Bayer this summer.

Richard Moseley, Bayer technical manager, explains that Harmonix® Monitoring Paste is a ‘pasta’ style bait that is highly palatable to both rats and mice, without containing any of the main eight food allergens, as it’s based on oat flour, rather than the standard wheat base.

“This not only means that it can be more suitable for application in facilities such as food production factories, schools and hospitals without contamination. It also has great sustainability credentials, as it won’t harm non-target species if accidentally consumed.”

Harmonix® Monitoring Paste is set to change the way that pest controllers detect an infestation, with both night and daytime traceability. “It’s really clear to see if rodents have eaten the bait, as their droppings will glow blue when a UV light is shone at night time. But they’re also easily spotted in the daylight too, as they turn dark red,” says Richard.

Richard mentions that an increasing number of pest controllers are being asked to produce allergen statements on a regular basis, especially when working in sensitive areas. While they may be able to continue to use products containing allergens, they must be formally declared.

“Harmonix® Monitoring Paste has also been independently certified by food science organisation, HACCP International, as suitable for use in food manufacturing premises. This helps to take the stress of product selection and paperwork away from the pest controller, as the independent HACCP certificate can be supplied to the site manager as evidence that the product is suitable for a food manufacturing environment,” says Richard.

The new monitoring bait is the perfect addition to an integrated pest management programme, as Harmonix® Monitoring Paste helps to make toxic rodenticides more effective and efficient, by acting as a ‘pre-bait’, to get the pests used to feeding in a certain area.

“Once it’s clear you’ve got an infestation from using Harmonix® Monitoring Paste, I’d recommend moving on to a similar bait, such as Rodilon® Soft Block, as rodents will already be accustomed to feeding on a ‘pasta’ type bait in the area. This helps to minimise bait shyness.”