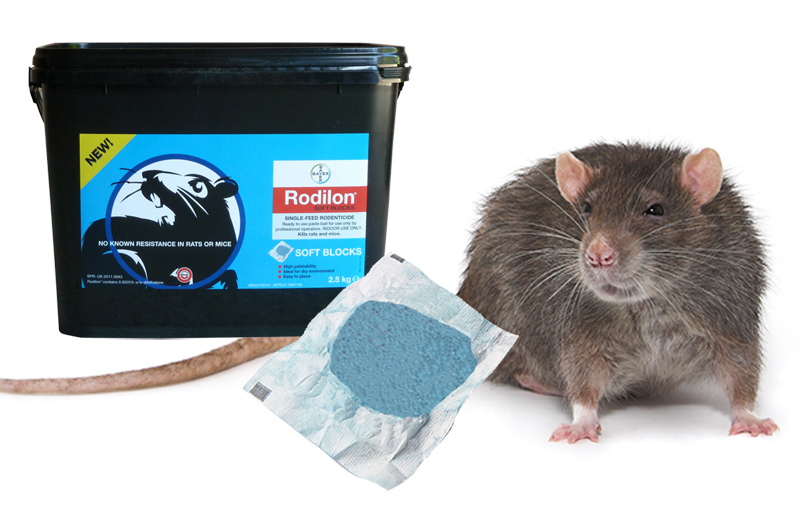 The Bayer Rodilon® rodenticide range is now approved for indoor use and outdoor use (around buildings), giving pest controllers a new choice when it comes to selecting an effective product for use around buildings.

Before now, the rodenticide range has been approved for indoor use only. “As Rodilon® is becoming an industry favourite, then this is fantastic news for the sector,” says Richard Moseley from Bayer.

According to Richard, this new approval should transform the treatment of rodent populations in areas where control has been unsuccessful in the past.

Rodilon® contains difethialone, an active with no known resistance. Previously, the actives bromadiolone and difenacoum have been approved for indoor and outdoor use, but some rat populations have developed resistance to them in certain areas of the UK.

“With the ability to apply Rodilon® indoors and outdoors (around buildings), rat populations can be promptly controlled in a targeted manner,” says Richard.

The new approval is part of a wider initiative issued by the Health and Safety Executive (HSE), to ensure that rodenticides are used more responsibly, and don’t affect non-target species such as field mice, voles and the birds of prey that eat them.

“This means that with this new approval, Rodilon® can be used to treat rodent infestations around affected buildings. There is no limit to the distance around the building that the treatment is used (within reason), as long as you can prove that rodent activity is affecting the building.

“The news will have a direct and positive impact on the environment, because by using a product with no resistance, targeted control can be quickly achieved, and then you can revert back to non-toxic monitoring,” he says.

“Before these new measures were brought in, actives with resistance could be left outside for long periods of time, and because the rats have built up resistance, all you’re doing is feeding them. Also, if the rats didn’t eat the bait, mice or voles would, controlling them and potentially transferring the poison to birds of prey,” adds Richard.

The new changes have been approved by the HSE and are in line with SGAR Stewardship regime, details of this can be found at; www.thinkwildlife.org/crru-code/

Label terminology is therefore changing, so please ensure that you read the label before use.